The Philadelphia 76ers will take on the Indiana Pacers this Monday evening (13/01/2020) at the Bankers Life Fieldhouse in Indianapolis. Watch this matchup at 7:00 PM ET. This Eastern Conference clash between the 76ers and the Pacers will be an interesting one as the Sixers will want to build up some momentum when playing this game. The Philadelphia 76ers were quite impressive with their wins against the Celtics and Oklahoma City Thunder.

On the Other Hand, the Indiana Pacers have not been doing so well this season. However, the Pacers were able to bounce back impeccably as they won a match against the Chicago Bulls this past Friday. The Sixers had four consecutive losses, so they will be looking to bounce right back. Many critics saw that Ben Simmons was not able to step up in the offensive line. During the game against the Mavericks, the Philadelphia 76ers were only able to muster 91 points with a 37.8 field goal shooting percentage. 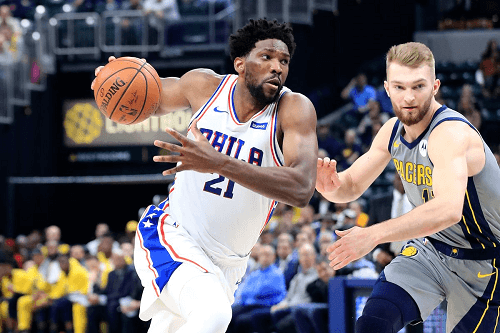 Matchup Predictions for the Philadelphia 76ers vs. Indiana Pacers

We are expecting the Sixers to improve their numbers when they play against the Pacers. The Indiana Pacers are currently ranked 8th when it comes to scoring defense. Their rivals only average 106.5 points per game when they play against the Pacers. The Philadelphia 76ers should be quite concerned about their inconsistent scoring record as they enter this Monday evening matchup. Joel Embiid won’t be present in this game as he is out with a finger injury. When it comes to scoring offense, the Philadelphia 76ers are ranked 18th in the league. They have the 15th spot in scoring efficiency.

We are hoping the Pacers will have the same fire that they displayed against the Bulls. Maybe they can be comforted by the fact that they have the same problems as the Philadelphia 76ers.

Get the best betting odds from our top sportsbooks in the USA. You can also check out highlights of the previous matchup before the game this evening.