The Philadelphia Flyers match against the Carolina Hurricanes is set to be an explosive one. These two teams from the Metro Division will battle it out at the PNC Arena in Raleigh. The game is set to start at 7:05 pm EST. Flyers have managed to win two of their games played against the Hurricanes. When we look at the rankings in the Metro Division, we can see that the Flyers are ranked 5th. They have not been doing so well on the road, and they will need to get their act together if they want to get closer to second place. This will be the final game of six that the Philly Flyers will be playing on the road. They have lost the majority of the games they’ve played on the road. They had one win with a 2-1 score over the Ducks. The Flyers have been outscored 22-20 in the four games they have played. We are confident they will want to redeem themselves with this game. We can tell that Philly fares well at home than on the road. 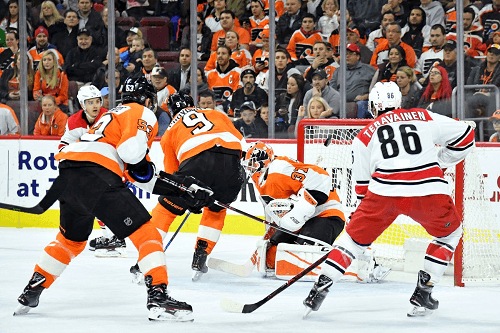 Matchup Predictions for the Philadelphia Flyers vs Carolina Hurricanes Game

Carter Hart did not have a good time when he allowed three goals 20 minutes into the game. This was before Brian Elliott replaced him. We may see Elliott making a return in this game between the Hurricanes. When it comes to the NHL, the Flyers are currently holding the 15th spot when it comes to scoring. They average about 3.7 goals per game. In the defensive area, they are ranked 11th in the league. They only allow an average of 2.95 goals per game.

The Carolina Hurricanes have been having quite a consistent season thus far. We have to remember that this is the team that made it to the Eastern Conference finals in the previous year. So, we can guess that they are capable of making it to the playoffs. Lately, they have been struggling quite a bit. They will enter the game against the Philadelphia Flyers with a previous loss against Tampa bay Lightning. They have lost two consecutive games, and in seven games, they have lost five of those matchups.

Petr Mrazek was able to allow three goals in 26 goals shots. The Hurricanes are ranked 8th in the league when it comes to scoring. They have an average of 3.29 goals per game. They hold the 8th position in defense, allowing an average of 2.56 goals per game. In this matchup, we believe that the Carolina Hurricanes will take the win against the Philadelphia Flyers.

Please take a look at the various betting odds that we sourced from our top sportsbooks in the United States. You can also see highlights of a previous matchup ahead of the start time.