The Los Angeles Kings will take the trip from the opposite coast to take on the Tampa Bay Lightning. The matchup will begin at 7:05 pm at the Amelie Arena in Tampa. The Kings lost against Carolina on Saturday night. The final score was 2-0. The Tampa Bay Lightning did not fare well against the Devils on Sunday with a final score of 3-1. These two teams have met six times, and the Lightning has won all six. This included the 4-3 shootout at a home win in their recent matchup in February 2019. We will have to see how these teams fare against each other in this interconference clash.

Before you make any decisions in terms of placing bets, you should take a look at the different stats of both teams. We will also provide you with the different betting odds from various sportsbooks in the USA. Our experts were also kind enough to give us their predictions of this matchup. 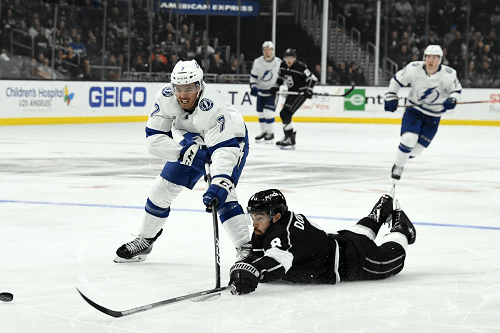 The Los Angeles Kings are not having a good time this season; they have lost four out of the five games they have played. Including the latest match against Carolina this past Saturday. The Kings are ranked 7th in the Pacific Division. They are lagging 14 points behind the Canucks for the ultimate playoffs spot. In the Division race for the top spot, they are 15 points behind the Flames and Coyotes.

The winning streak of the Tampa Bay Lightning was cut short when New Jersey knocked them off on Sunday. In the Atlantic Division, Tampa Bay is ranked 2nd. They are seven points behind Boston for the contest to lead the division. The Lightning is ranked 1st in the league when it comes to scoring. They have an average of 3.58 goals per game. The Tampa Bay Lighting allows an average of 2.89 goals per game for every season. Therefore they are ranked 14th in the league in defense.

Our experts believe that the Tampa Bay Lightning has an advantage over the Los Angeles Kings in this matchup. They think that the Lightning will win.

Check out these betting odds from our top sportsbooks you can also see highlights from the last time these two rivals clashed.