Kamaru Usman is set to face Jorge Masvidal in the welterweight title battle on Saturday at UFC 251 in Abu Dhabi on Yas Island.

Interestingly, when both fighters arrived in Las Vegas on Sunday, they had to take the coronavirus test and self-isolate as they waited for their results. Luckily, they both passed the test and the fight is set to continue. This might not have been the case had they not passed.

Fortunately, for many fans the UFC worked hard to make sure that Kamaru Usman was on the card following the withdrawal of Gilbert Burns on Friday night.

Both these fighters have been on social media posting content that alluded to the upcoming fight. If you want to know what we think of this matchup then you should read more. 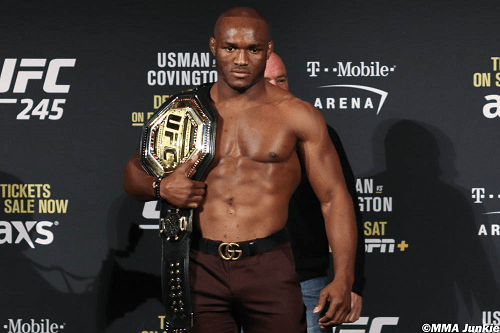 Jorge Masvidal vs Kamaru Usman to Fight in Main Event

Kamaru Usman will have to defend his title as he fights against Jorge Masvidal. Usman was initially supposed to battle Gilbert Burns but he tested positive for the coronavirus and was forced to withdraw from the fight.

Many sportsbooks have placed Masvidal as an underdog because Kamaru Usman remains the title holder of the Welterweight.

Masvidal has fought in 48 fights through his career and he has appeared in many MMA battles before he gets his shot at the title.

Initially this Usman vs Masvidal matchup was not able to happen because Masvidal was in contentious negotiations with the UFC. So, it seems like they came to an affable agreement that would see Masvidal partaking in the main event of UFC 251.

As we have said before Jorge Masvidal is the underdog going into this fight. However, he has a better record the Gilbert Burns did. Especially when he is compared to Kamaru Usman.