Bill Belichick Responds to Claims that Patriots Tipped the Officials Off

Bill Belichick has finally responded to accusations that the Patriots tipped off the game officials during the New England vs. Dallas game on Sunday. The officials flagged the Cowboys in the fourth quarter for an important tripping penalty. This penalty resulted in Cowboys losing any chance of winning the game against New England. The penalty that was imposed was the second time the Cowboys had been warned about tripping in the game. This was a very strange call because there had been only one other penalty related to tripping that was called on every team combined in the NFL this season.

Many have been asking why the game officials suddenly started awarding penalties to the Cowboys, especially in the game between the Patriots and the Cowboys. Some believe that this only happened because Bill Belichick was to blame. Rex Ryan is one of the people that hold that opinion. According to Ryan, Bill Belichick might have sent more film to the NFL league to make sure that they would be checking out for the violations that involve tripping when it comes to the Cowboys. A lot of people have latched on to this theory, especially because no NFL team has ever been penalized for tripping twice in one game. 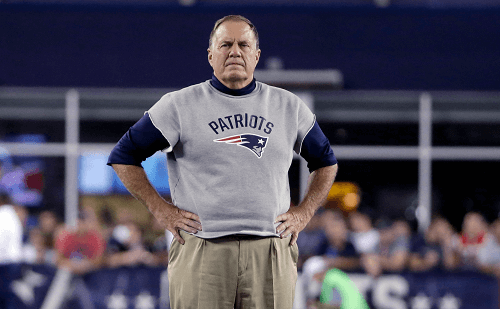 During a Patriots’ press conference, Belichick was asked if he had seen any signs of tripping by the Cowboys in the Film he sent through, and he denied it. He further said that the Cowboys are the least penalized team in the NFL. He also said that the team does a great job. When Bill Belichick did not sufficiently answer the first questions, journalist in the press conference asked him whether he asked the officials to look out for the Cowboys tripping. And he still not did not give a clear answer. He merely mentioned that it would be difficult to find examples of tripping when it comes to the Cowboys because they are penalized less than other teams.

Belichick ended off his answer with a compliment, which some have indicated that it could be a sign of a guilty conscience. However, no one can verify whether Rex Ryan’s theory is correct or not.

Later on, the NFL released a statement declaring that the penalties should not have been called. And the officials were not fair to the Cowboys. However, that is cold comfort because the penalties put the Cowboys at a disadvantage, which could have potentially contributed to their loss.