Home » Jay Gruden Has Finally Spoken Out About His Dismissal

Jay Gruden Has Finally Spoken Out About His Dismissal

Jay Gruden has finally broken his silence regarding his dismissal as the head coach of the Red Skins. The removal comes after the Red Skins lost their first five games in this year’s season. The termination was something that has been expected by many people, including Jay Gruden.

Gruden has been a part of the Red Skins for over five full seasons. In that time, he has accumulated a record of 35-49-1. In his tenure as head coach of the professional NFL team, for the past three seasons, they have finished third place in the NFC East.

On Monday Jay Gruden told the media about the last few things he did in his final hours of being head coach of the Red Skins. He said he received a text message at 8 p.m. on Sunday, which made him aware of a meeting he should attend at 5 a.m. The meeting was with the owner of the Red Skins, Daniel Snyder. He told the media that when he received that text, he knew what would happen the next morning. 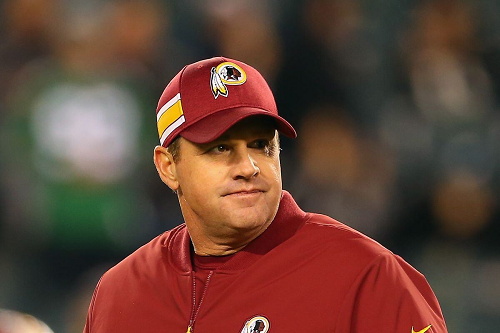 Jay Gruden further told the media that he was not bitter. He said that he understands that the business is based on production and he did not produce the results that he was expected to.

Stephen A Smith of ESPN was one of the people who were concerned over his mental state. He claimed that it seemed as if Gruden had mentally checked out weeks ago. However, Gruden wants to expel this issue. He told the Washington Post that he actually did work hard in his job.

In 2018 the Red Skins seemed to have been in control of the season. However, there were a few injuries that sidetracked their victory. This made the team finish with a record of 7-9 for the second time.

Gruden was well-respected by both players and coaches in the NFL. Some are speculating that the problems with the Washington Red Skins go much higher than the coach. They have even gone further in wondering whether Jay Gruden’s dismissal was fair.