William Hill got a bet worth $506, 000 for the Browns to cover. But the support of the Rams was massive. The director of trading at William Hill, Nick Bogdanovich, told the media that they suffered quite an enormous loss over this bet. This wager was placed in Atlantic City at Ocean Casino Resort. The $506, 000 was the biggest wager that most sportsbooks had seen in a long time.

While the $506,000 wager on the Browns was the biggest one that William Hill had seen, there were other bets large bets that were placed for other NFL professional teams during the season. 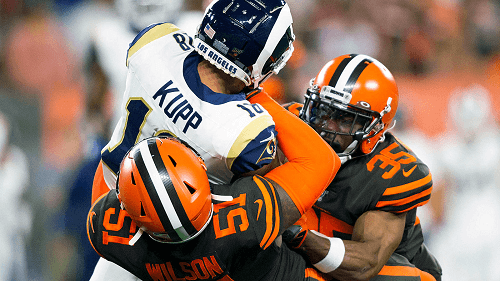 Baker Mayfield and Freddie Kitchens had the opportunity to prove to everyone, including the Browns fans that they were worth the hype on Sunday. However, the Los Angeles Rams have other ideas marching onto a 20-13 win.

Experts believe that Kitchens nor Mayfield did not look all comfortable when playing against the Rams. However, Brown’s defence fought hard against the Los Angeles Rams. Football experts believe the Rams won because Aaron Donald and Clay Matthews were unstoppable on Sunday.

The Rams also won because Cleveland Browns have a deplorable offensive line. The Browns need to work on its offensive line. Additionally, Freddie Kitchens also contributed to the loss because he did not handle the late-game fourth-down well.

On Sunday other games were also wagered on using William Hill. Large wagers were placed on these games and the games that were bet on including the Jets and Patriots as well as Dolphins and Cowboys.