Ben Askren will step into the fighting ring with a disaster of a loss against Jorge Masvidal in his record, so he will want to redeem his name. The UFC fight night 162 will not only include the heavyweights. The lightweight fighters will also have their chance at the title. The main card fight will start at 8 a.m. ET on Saturday. Even with his disastrous loss against Jorge Masvidal, he is still considered a favourite with -185 odds while Maia is the underdog in this game with +160 odds.

Before you place your bets on the UFC Fight Night 162, take a step back and see what the experts think about the fight on Saturday. 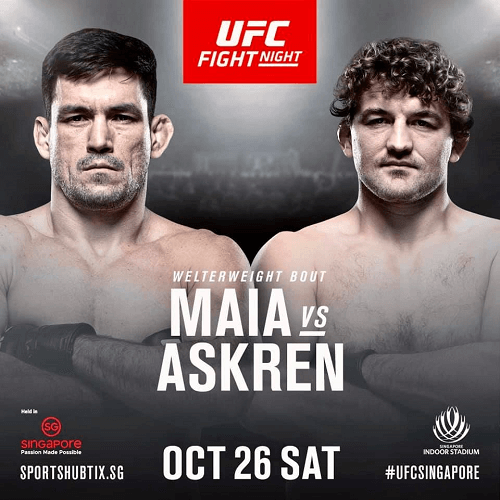 These are the players that will be playing under the main card in Singapore. Here is what the different experts think:

The MMA experts believe that the only way that Frank Camacho can win against Beniel Dariush will be if he pulls out a surprise punch. Beniel is believed to be the better-skilled player in the  event. However, in the past, Dariush has been a bit fragile when fighting. With that being said, he can pull himself out of the worst situations.

As we have mentioned before, the main card fighters are not the only fighters that will be going head to head in the UFC Fight Night 162 event in Singapore. Here is a list of the various players and their odds:

Ashley is thought to struggle score takedowns in the fight. The experts believe that her edge is best shown when she is in the top position. Randa Markos and Evloev and Jeff Hughes are the best picks in this event.

See a preview of the Maia vs Askren match: