The NY Rangers vs Pittsburgh Penguins game is set to be the best game on Tuesday. Two teams from the Metro Division of the National Hockey League will face off with each other at the Madison Square Garden in the Apple city. When you look at the stats the Penguins come into this game with a record of 10-7 while the New York Rangers will head into the game with a record of 7-8.

The Penguins are argued to be chasing the Stanley Cup this year while the Blackhawks will be vying for a spot in the NHL Draft. The Pittsburgh Penguins went head to head with the Blackhawks in their previous game. In that game, the penguins were the favourite and with a handicap of -220 and bettors would have had a bad loss. However, Jared McCann came through and scored the deciding goal. It seems like the Pittsburgh Penguins are getting back on the right path. We can see that they have won their last two games. 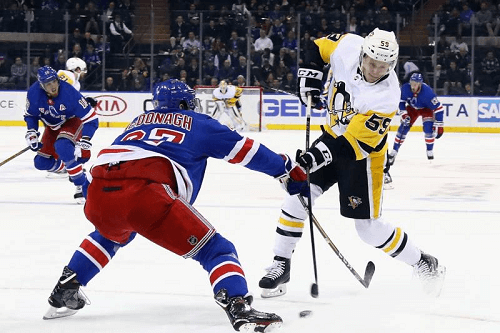 The Rangers are getting off on a languid start they only had a record of 3-6 in their previous nine games. However, it seems like they are starting to play a better game than they have been in the past. Their last loss was to the Panthers. The score was a 6-5 shootout. Ryan Lindgren was the scorer during the penalty shootout, which was his first time in his career participating in one. In the previous year, the New York Rangers did not have the best offence. However, when it comes to scoring, they are ranking in the top 10. Over the last 8 games, they have an average of 4 gpg (goals per game).

Best Bets for the NY Rangers vs Pittsburgh Penguins Game

Pittsburgh is predicted to be the best team to bet on in this game. Even though the Rangers have been playing  better than they have in previous games, the Penguins are still in better shape. When you look at the offence line, both teams are even. However, when it comes to the crease, the Pittsburgh Penguins have a better edge.  The Penguins have managed to win 4 games in a row, and  they may push their winning streak. The best part is that the Penguins have a record of 6-0 in the previous games against teams from the Metro Division.

see a preview of the game today: