The North Carolina Tar Heels will take on the Temple Owls this afternoon at the Navy-Marine Corps Memorial Stadium. These two teams will meet for the first time as they both will fight tooth and nail to ensure they lift the trophy. The North Carolina Tar Heels had a record of 6-6 at the end of the regular season. The Tar Heels could not be more pleased about the way the regular season ended for them. Oddsmakers predicted that they would finish the season with five wins, and they supposed that prediction.

The Tar Heels will make their first college football bowl since 2016. Coach Mack Brown will be happy if the Tar Heels win the matchup this afternoon. It would be their first win since 2013. The Tar Heels are used to pressure by now because they had to win their two last games to qualify for a spot in the bowl. The team will want to continue winning as they take on the Temple Owls. 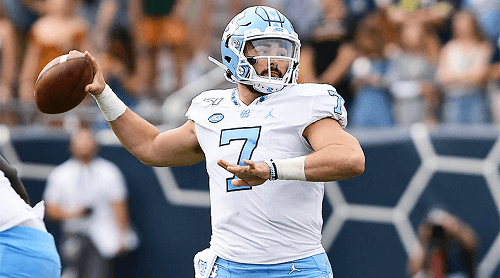 Sam Howell will be expected to lead the offensive team of the North Carolina Tar Heels. Howell has been in impeccable shape form during the regular season. We do not doubt that he will be playing at his optimum best during this bowl. The Defense of the Tar Heels will also be in top form going into this game. The Tar Heels have excelled immensely when it comes to the third down. Their rivals have only managed to convert 37.2% of the time.

We should not discount the Temple Owls just yet. They go into this heated battle against the North Carolina Tar Heels with a record of 8-4. The Owls have won three of their final four games. Temple Owls have been good enough in the regular season to get a spot in the Military Bowl. This is something they have struggled to accomplish in the past.

The Temple Owls will be looking to defeat the Tar Heels to add another win to the eight victories they already have. The Owls have played a bowl game for five consecutive seasons, so this should be familiar territory for them. The Tar Heels and the Temple Owls have been playing impressive games in the regular season. These teams are both formidable in their respect. However, since the offense and defense of the Tar Heels have been performing well this season. We believe North Carolina Tar Heels will take this one.

Before you place your bets at any sportsbook, have a look at the different betting odds for the matchup.

Check out our latest Sports News:

Charlene knows her way around sports betting – be it a betting house around the corner or in the realm of online sports betting. She is big on betting on all the top sports worldwide, especially in the USA. If you are keen on making better decisions or smarter choices when placing a bet, then rest assured, Charlene’s articles will significantly help you win big!

#1 US Sports Betting Site for November

Best Sports to Bet on in the USA