NFL officials have finally explained the Lions penalties. Clete Blakeman, as well as other NFL officials, have finally provided their perspective on the penalties that were imposed on Trey Flowers on Monday night. The Lions penalties played a significant role in the Green Bay Packers victory. On the television, it appeared as if Trey Flowers positioned his hand on the shoulder of the other team’s lineman and not on his head.

The NFL official threw the first flag. The flag turned a sack on the 3rd and into an automatic first down. This resulted in the Packers scoring a touchdown down the line. The second penalty came when the Packers were in their last drive to win the game. The penalty might have contributed in the Lions not being able to get the ball back on the offence. The NFL officials have felt the need to comment on the decisions that many are describing as controversial. 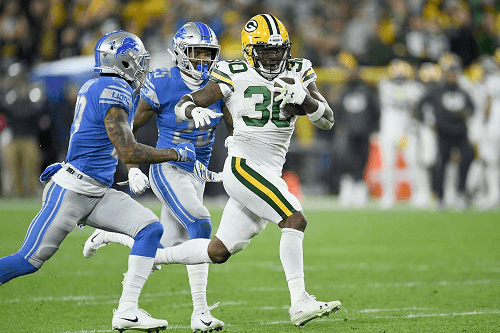 Clete Blakeman Explains How the Lions Penalties Came to Be

Blakeman explained that the last penalty was the one that he discussed with the umpire who made the decision. The penalty was imposed due to the illegal use of hands which can be classified as a hands-to-the face foul. Blakeman further explained that for an action to be considered a foul, there must be forceful contact to the head and the neck of the player defending. Therefore, in the mind of the umpire, Trey Flowers had pinned and held back the opposing team’s defender for a prolonged period. This action resulted in a foul.

The action allowed Aaron Rodgers the chance to run the clock. Rodgers was able to throw an incomplete pass at the other team’s 16-yard line. The pass would have resulted in a 34-yad field goal attempt. The Lions were given a chance to catch up. But the Green Bay Packers were given the first down and were able to run the clock out.

Flowers does not Believe His Actions Deserved a Penalty

Trey Flowers told the media that he did not believe that what he did was an action that should be constituted in a penalty. He just said that the hands to chest action is a move that he regularly does.