The Milwaukee Bucks vs Detroit Pistons matchup game this Wednesday is set to be quite exciting for fans. The Bucks will travel to Detroit to go head-to-head against the Pistons. The Milwaukee Bucks are coming in hot as they lost their last game against the Knicks on Monday. While the Detroit Pistons were on the road to face Cleveland in the Central Division competition. It would seem that the Bucks have a slight advantage over the Pistons as they have won their last five games they have played.

The Bucks will be looking for a 13th consecutive win in the Milwaukee Bucks vs Detroit Pistons matchup on 4 December 2019. The Bucks currently hold the top position in the Central Division as they have 4.5 games above the Pacers. During the opening quarter, the Milwaukee Bucks flew to an 18-point lead, and it seems they have not looked back since. When it comes to offense, the Bucks are ranked number one averaging 120.8 points per game in the season. 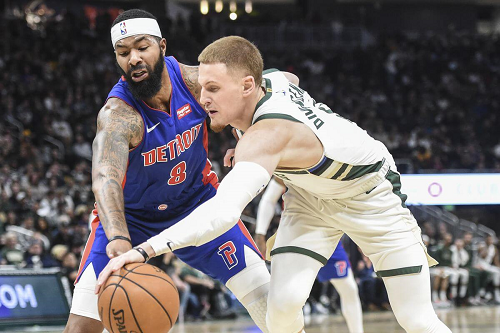 Will the Pistons Level Up in the Milwaukee Bucks vs Detroit Pistons Matchup?

The Detroit Pistons will be playing their second consecutive game this week in the NBA. On Tuesday, they played against Cleveland. In the Central Division, they are ranked in the third position. They are 10.5 games behind the Milwaukee Bucks. It would seem that the Pistons’ home stats are more are better than their away stats. They average about 108.2 points per game. The Pistons are 2-4 against Central Division rivals.

The Pistons are ranked 19th in the league when it comes to scoring on the offense. With an average of 108.2 points per game in the season. With regards to defence, Detroit is in the middle of the pack in league with a ranking of 14th position. The team may have a chance against the Milwaukee Bucks with the help of Andre Drummond, Derrick Rose and Blake Griffin.

The fact that the Detroit Pistons are playing their second consecutive game in the week may not count in their favour. Even though they are playing a home game may not also help in this case. Especially since the Milwaukee Bucks are in top form and on a winning streak. If you are going to bet on this game, it may be safe to bet on the Bucks as they are poised to bag their 13th win this Wednesday.

See highlights of the last time the Bucks and the Pistons met on the court: