This evening the Hawaii Rainbow Warriors will take on the Brigham Young Cougars in yet another NCAAF matchup for the season. In recent years BYU has had quite an advantage over the Warriors. The Young Cougars have won nine out of ten games since 1995 against the Hawaii Rainbow Warriors. So, college football fans should be in for an exciting contest between these two rivals. The Warriors have a mighty offensive team. While the defense of the Young Cougars is a force to be reckoned with. Fans should be able to watch this matchup from 8 pm EST at the Hawaiian Airlines Field at Aloha Stadium.

The Brigham Young Cougars did not have a fantastic start this season. So, they really should be congratulated for being able to make this college bowl. Their first game of the season ended with a loss to Utah. However, they bounced back and won two games against Tennessee and USC. Things soon took a turn for the worst when they lost three consecutive games against Toledo, Washington and South Florida. The season has been quite shaky for the Young Cougars. We will have to see how they fare against the Warriors this evening. 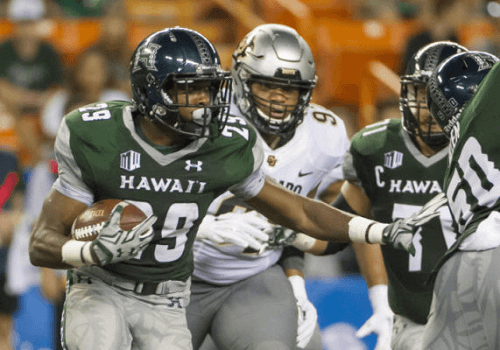 The Hawaii Rainbow Warriors have played 14 games this season so. They should have enough practice going into this game. They have two games more than any other NCAAF team in the country. The Warriors even had a great start when they opened the season with victories over Oregon State and Arizona. However, they lost against Washington earlier on in the season. They bounced back quite impeccably when they clocked in wins over Central Arkansas and Nevada. The season has also been quite rocky for the Hawaii Rainbow Warriors with wins here and losses there. They also lost matched against Boise State and Air Force. They played a fantastic match against New Mexico and won. The game between the Young Cougars and Warriors should be quite exciting, seeing as both teams have had an impressive season. We believe that the Young Cougars will win this matchup against the Warriors.

Before you make your pick and place a bet check out these competitive betting odds from our top sportsbook in the USA. You can also check out a preview of the match here: