The Green Bay Packers will face the Minnesota Vikings Tonight at the U.S Bank Stadium in Minneapolis. The game is expected to kick-off at 8:15 pm EST. We are about to witness a great match within the NFC North division. When these two teams met earlier this year, the Packer took the victory with a score of 21-16. The Green Bay Packers recently won a match against the Bears with a score of 21-13. While the Viking enters this game with a 39-10 win against the Chargers. This win gives the Minnesota Vikings a 10-4 record for the season. The Packers have a record of 11-3 for the season.

If the Green Bay Packers win this matchup against the Vikings, they will clinch their first division title since 2016. Even though the Packers won their match against the Bears, there were some moments when it seemed like they would not win the game. The Packers have won their previous three consecutive games. These victories are mostly due to the excellent defensive team of the Green Bay Packers. The team is ranked 23rd in the NFL when it comes to defense and 11th for the offensive team. The one question that a lot of people have on their minds is whether the offensive team will score enough points to win against the Vikings. 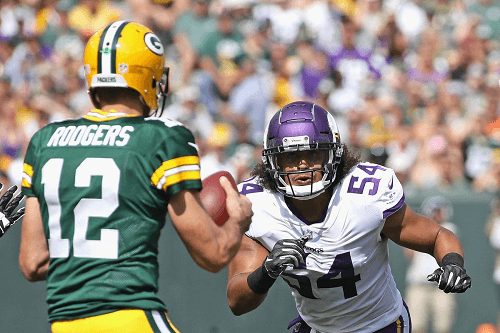 When we look at the stats that the Minnesota Vikings have, you can see that the team has had a solid season. The Vikings have won four of their previous five games. If they win this game against the Green Bay Packers, these two teams will be tied in first place in the NFC North division. These two teams may end up with a tie when the year ends. If they end up with a tie, the division will most probably give the Packers the NFC North division title. This is because they have a better record than the Vikings.

But we cannot discount the Vikings just yet because they have been playing an impeccably, especially in their last two games. They managed to outscore their opponents by a wide margin. Looking at the stats, we can see that the Packers have an advantage going into this game. However, we believe that the Minnesota Vikings will take this one given their excellent performance of late.

Betting Odds as the Vikings take the Green Bay Packers

Check out different betting odds from various sportsbooks. You can also see a preview of the match before these two giants meet up.