Home » Houston Astros are Not Happy About Cheating Allegations

Houston Astros are Not Happy About Cheating Allegations

The cheating allegations that have been levelled against the Houston Astros have not left them very pleased. There were many stories that have been written in the media which stated that the Yankees were not happy with the whistling that came from the Houston Astros dugout. The articles also claimed that there were banging pipes during the first game of the ALCS. This led the Yankees to believe that the Astros were spying and picking up pitches on the TV monitors.

The Houston Astros manager, A.J Hinch, told the press that these allegations were a joke. He also stressed the fact that Major League Baseball has a lot of processes that ensure that the games are fair. Hinch also dismissed the allegations of whistling as ridiculous. He told the media that when he heard of these particular allegations, he laughed.

Hinch further said that the Yankees should not hide behind anonymous quotes and take action if they believe there is cheating happening. 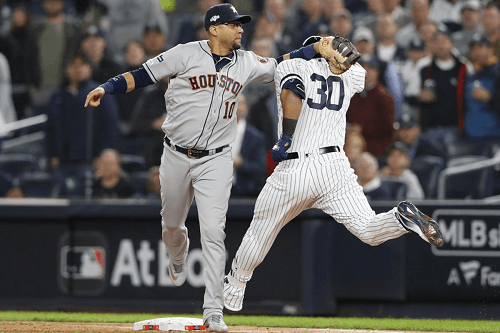 The Houston Astros has the same suspicions of the New York Yankees, but the only difference is that they don’t send anonymous quotes to the press.

Justin Verlander, Houston Astros pitcher, has also weighed in on the cheating allegations stating that they suck. He told the media that they use video footage of previous games to study the pitch as well as the signs used by the other games to develop strategies of their own.